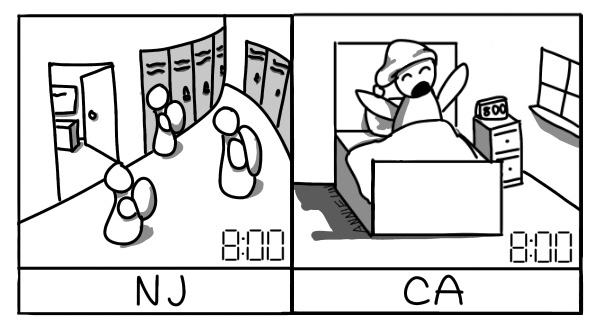 If you are ever at Morris Hills before 7:30, you’ll see a scene more akin to zombie movie than an American high school. Kids trudging through the halls half awake as some try to catch up on homework, while others try to catch up on sleep.

It has long been argued by the medical community that later school start times would allow students to get more sleep, leading to increased awareness and focus, and improved school performance. In 2014, the American Academy of Pediatrics published a landmark study in which they concluded that middle and high schools should start no earlier than 8:30, due to the adverse effects of sleep-deprivation. Other studied have come to similar conclusions. For example, the CDC warns that adolescents who sleep less than 8 to 10 hours per night have a higher chance of obesity, engaging in drinking or smoking, and suffering from symptoms of depression. Not getting enough sleep can also negatively affect brain development by changing sleep patterns, even into adulthood. It has also been well-established through studies that a lack of sleep causes students to be less focused, hindering school performance. The problem of sleep deprivation among students is especially prevalent in New Jersey, where only 15% of schools start at or later than what is recommended, falling under the national average of 17%. At Morris Hills, although the 8:00 start time falls in line with the national average, many students have a zero block class, starting at 7:18. These start times are both earlier than the recommendation of 8:30 a.m., and have clear negative effects on many students. “Sometimes it’s hard to think when you’re so tired,” says Academy sophomore Kunal Kumar, who is currently taking Fundamentals of Engineering during zero block. “I often find myself less focused,” Kunal added. When considering zero block classes, and the rigorous academic and extracurricular demands of high school, it’s not hard to see how students surviving on six, five or even four hours of sleep per night can have a negative impact.

Because of this and other studies, California state legislature recently passed a law making it illegal for schools to start earlier than this time. Supporters of the bill claim that sleep deprivation amongst teens can have severe adverse health effects, as stated before. However, the issue may not be as simple as simply pushing school start times back. Opponents of the California bill and similar measures have stated that implementing the later start times could have their own negative ripple effect on parents, busses, and extracurricular activities. Many schools may also have special conditions and programs which make it difficult to implement a later start time. Because of this, schools like Morris Hills could actually see many unintended side effects with a later start time. When asked about the challenges of implementing a later first bell at Morris Hills, Mr. Toriello emphasized the difficulty in effectively running a co-curricular program. “Pushing it even later, you run the difficulty in being able to effectively run your co-curricular program,” he said. A later first block time could mean pushing sports, clubs, and other activities back, potentially eating into family and personal time. Similarly, the logistics also present significant issues. For example, Morris Hills is a choice school which houses the Academy and Magnet programs, both of which accept students from outside the district. Because transportation for out-of-district students is managed by their home districts, a later start time could mean transportation conflicts, or that these students won’t get much benefit from a later start time as they need to leave for school early anyway. As stated by Mr. Toriello, “Some [out of district student] are getting picked up at six o’clock in the morning… if we went to a later start time, we could push z-block a little bit later, but then again, is it late enough that it is doing any good for our Academy students?” When considering such a bill for schools like Morris Hills, logistical issues and zero block classes could mean that hundreds of students would get no extra sleep from a later start time.

The question is should later start times be implemented across the nation and at Morris Hills? The answer may not be so black and white. While the scientific literature clearly supports a later start time, logistical issues could leave many students out to dry. At the end of the day, it is important to remember what this issue is really all about: improving the mental health and classroom performance of students. Later school start times are just one of the many options districts, parents, and governments should consider when addressing the core problem.  Other solutions, such as limiting homework and adding homework-free weekends, have shown similar health benefits. Morris Hills has taken these initiatives already and should continue to promote the mental and physical health of its students.